In yesterday’s APhotoEditor’s blog news,  there was a post on “The Selfie heard all around the world,” written by photo industry blogger Paul Melcher. He makes very interesting and valid points about mobile devices, and their positioning in the marketplace in the photography world today. He describes how this one single image, had the power to invalidate the efforts of photographers hired by publications for their work on the red carpet-making their captures obsolete and redundant, not to mention, possibly irrelevant.

And yet as the focus and fear for professional photographers has been on cell phone captures, new tools are already being implemented beyond the cell device. In this issue of Aperture, photographer Susan Meiselas discusses in “Photography, Expanded,” that new avenues are constantly emerging, creating an infinite range of possibilities for storytelling. 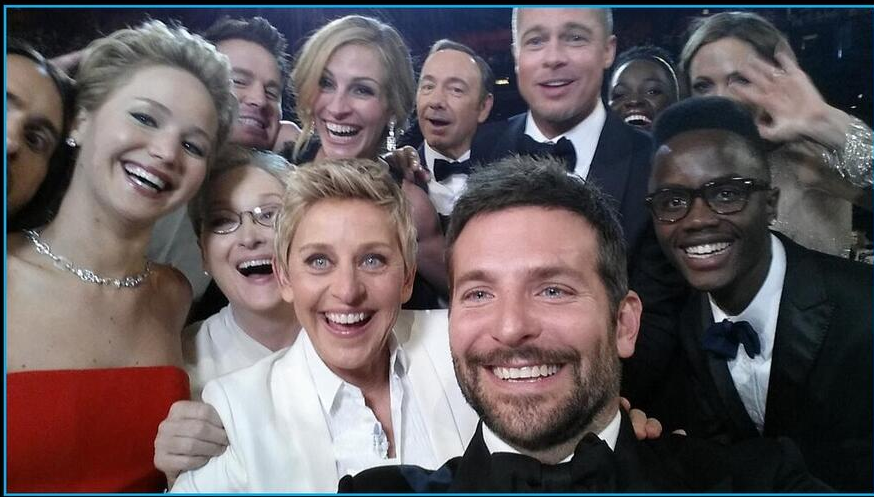 There are many things to consider about this viral selfie. One is the fact that it was generated by Ellen-(although executed by Bradley Cooper), in an arena where no photographer could gain access. But even so, it was Ellen’s spontaneity and energy that created the fun-loving image. It is a Samsung phone, and although Samsung was a sponsor at the Oscar’s, it was Ellen’s idea to take the selfie unprompted by the company to further promote the product.

The most important thing to note about this picture is that as a consequence of its creation, Samsung has donated $1.5 million dollars to two charities of Ellen’s choice-The Humane Society, and St. Jude’s Children’s Research Hospital; and the beauty behind it, is that it was taken impromptu as in good-natured Ellen DeGeneres fun, resulting in funds donated for animals and children in need. Ellen has redefined the “selfie,” which is attention to oneself, and instead made its focus on millions of others. That is the power of photography at it’s best, no matter what the device.

One thought on “The Infamous Selfie”